Delvets takes the Veterans Cup for 2019

It took a complete game pitching, and a triple but Delvets takes the Cup

Brian Downey threw a complete game to get the win. Jake Dunion hit a triple to secure the win late in the game in another pitching duel between both teams

Delaware Post 1 started both games of a twin bill at Seaford by scoring a run, and the Nanticoke Post 6 Patriots answered, but that was where the similarity ended.

In the First game, Post 1 took advantage of two errors, one on a wind blown fly ball to go up 2-0 in the first. The Patriots answered with one, and the game settled into a close contest until a disputed play in the outfield where the original call of out was reversed - leaving the bases loaded with 1 out, instead of the inning being over. Post 1 went on to score 4 runs, and the Patriots couldn't answer.

Post 1 got another 4 in the 4th, and added the 10 run rule last run in the sixth. Dalton Reid got the complete game win, Kris Medford took the Loss for the Pats, in a game with 5 errors, and two double plays.

In Game 2, Post 1 again got up 1-0 in the first, but the Patriots answered with 5 as the first 5 batters reached base, and scored, giving the Patriot's pitcher, Kobe Heineke all the runs he'd need to win.

Heinicke settled in and shut out Post 1 for the last 4 innings to earn a complete game win. Post 1's started Jeremiah Glavin took the loss.

There were no extra base hits in either game, and several players had multiple hits on the day. The day ended with both teams on top of their divisions, holding down an early 1 - 2 seed in the league.

Delvets Walks Off with a Win

Walk off play on a ball hit to Center.

Del vets wins 1-0 with a walk off In the Bottom of 7th in a game moved to Wilson Field to beat some rain predicted for Thursday.

It was a classic Pitcher's Duel for 7 innings as Justin Brooks pitched all 7 to get the win for Delvets.

Logan Doran tripled in the bottom of the 7th and Will Davis hit a fly ball to center field for the walk off win. 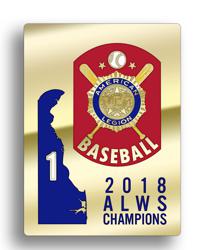 Keep the Rules;
Keep Faith with my teammates;
Keep my temper;
Keep myself fit;
Keep a Stout heart in defeat;
Keep my pride under in victory;
Keep a sound soul;
A clean mind;
And a Healthy body