Weaver knocked in the go ahead run in the top of the 8th with an RBI single down the right field line.  But Post 1 loaded the bases with 1 out in the bottom of the 8th with 2 singles and a walk, before Eric Ludman singled down the left field, scoring Thomas and Awtry for the walk-off, extra inning win.

Patriots, Generals have Two Outstanding Pitching Efforts but still somebody had to lose

Game 1: Josh Venti (Generals) and Mitch Moyer (Patriots) squared off in a classic pitchers duel. Venti pitched 6 no hit innings, with 5 strikeouts and 5 walks, earned a win, but was lifted in the 7th for Dan Brown, who gave up one hit (vs 2 Strikeouts) but completed the shutout. Moyer, who took the loss, still struck out 11, vs 1 walk, but the Post 6 bats were silent, and the General's won the game.

Austin Warrinton homered in the 2nd to take the lead, Kevin Buglio and Josh Venti both doubled as the Generals used the long ball to take an overwhelming lead by the 5th Inning.

Game 2: Another Pitcher's Duel - as Nick Zigna took the hill for the Generals, and Tret Toppin (who had finished the first game) stayed on the mound for the 2nd game of the DH.

Zigna gave up 4 hits, against 5 strikeouts, to the Patriots and took the loss. Toppin struck out 7, and gave up one hit, as he pitched a complete game 7 inning shutout of the Generals for the win.

The only run was scored by K-Ci Widdowson, who led off the 4th with a bunt single, and scored on Justin Gray's single to left.It was the only run of the game. 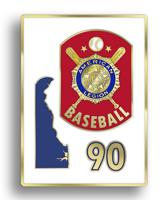 The team is named "The Generals" after Delaware native General W.W. Atterbury and is currently sponsored by O'Brien Post 10 of the American Legion.